← more from
Goner Records
Get fresh music recommendations delivered to your inbox every Friday.
We've updated our Terms of Use. You can review the changes here. 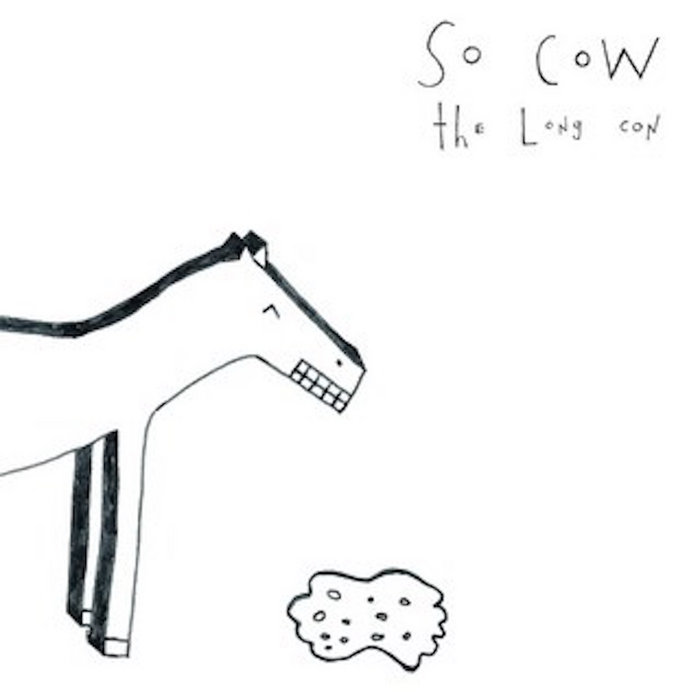 After years of recording as one man in several sheds, The Long Con is the first full-on, full-band recording from Ireland’s So Cow. Brian Kelly is this time joined by long-time foil Jonny White on bass and the pride of Dublin, Peter O’Shea, on drums. It’s also their first album to be recorded in a studio and, if that isn’t enough, has an honest-to-goodness producer involved, namely Deerhoof’s Greg Saunier. Recorded live over the course of four or so days, the album is an attempt to capture So Cow’s live sound, as opposed to the overdub-happy chaos that marked the debut LP, 2009’s best-of-up-to-then compilation So Cow, and 2010’s Meaningless Friendly.

The album was recorded in Ballyheigue in County Kerry, hitherto and probably-now-still most famous as the birthplace of the guy who coined the term “entrepreneur.” Saunier and the band ran through the process at a fairly spectacular pace, most likely inspired by the wi-fi being out of order. The Deerhoof man himself makes an appearance on “Say Hello,” a pretty-much-improvised final day runabout. The Long Con follows on from the sufficiently varied Meaningless Friendly and their half of Out Of Season, a split LP with Dublin’s Squarehead, in that it zips around styles in a way that, to this day, makes their friends find them “hard to describe.”

The band themselves are of the mind that they sound like The Chills or McLusky, but they’ve lost all perspective at this stage so don’t go taking their word for it. Similarly, lyrics telling of joyriding local politicians, John Deacon’s post- Queen level of contentment, and the terror of turning 30 can probably now be interpreted any number of ways.